The Escalante Architects peloton taking a break after losing the jersey at the Tour d'France. Charles, Ana, Dicle, Stephen, Ju-Ju and Marco 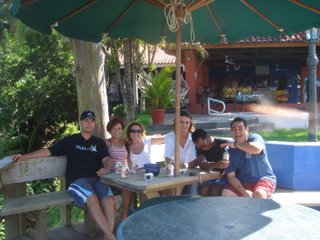 We were informed today that the "Zoll Residence" will be published in SHELTER MAGAZINE out of Chicago. Congratulations to everyone who made this project possible, starting with Larry and Eileen Zoll, Sam Cardella, Marcello Villano, David Glomb, Thomas Wallace, Logan Graves, Dave Peyton, Martin Brunner, Rosy Chapa, Fernando Olaiz, Marco Garcia and of course the whole Escalante Architects team. A little feather in our cap. We all should be proud, because we accomplished the design and building of the project in 18 months, and the integrity of the architectural idea was never compromised, in fact, it was enhanced, and... we did not blow the budget.

Re: The Palm Canyon Mixed-Use Project

Statement by Ana Escalante to the Planning Commision

Let me start by stating that I am very passionate about The Palm Canyon Mixed Used Project and we are very honored to have been selected to be the architects for the project.

Personally, I as well as our team members, Marco Garcia, Dicle Bath, Susana Hernandez and Stephen Gardner, have devoted over a year of our labor to bring this project before you. We have missed birthdays, vacations, declined other work because we believe that projects such as the one before you seldom come to our city and to our professional lives.

What you see before you has all been produced by local residents, local professional and ourselves.

Nevertheless, this project needs to be defended on its own merits, and Planning Commission members, as a 21 year resident of this community, I can assure you that “The Palm Canyon Mixed Use Project will accomplish the following for the City:

Revitalize the life of downtown by providing amenities vital to the life a vibrant downtown, and that is enforcing the image of Palm Springs as a place of destination.

It will anchor a very crucial juncture at the end of the Palm Canyon Corridor, by replacing a series of existing buildings that have out-lived their shelf-life.

It will eradicate an ever growing “transient” problem and eliminate that blighted part of our downtown, which is not very complimentary to the image of Palm Springs.

It will become the gateway or signage building for the vehicular traffic coming from the eastern communities.

The City and its citizens will benefit because the project provides public plazas and a public pedestrian promenade linking Indian Canyon and Palm Canyon, but most importantly it will provide places to be and enjoy the outdoor experience we all so much enjoy in out city.

Those public amenities woven with retail spaces and low scale residential units around the perimeter of the site will make that area a vibrant place to attract locals as well as tourists.

Additionally, the architecture of the project, is not just a compilation of buildings arranged to maximize profit for the developer, but they are the byproduct of a careful urban analysis of that “the founding fathers intended Palm Springs to become” a good place to live, a place to visit and most importantly a place in which the quality of life is the best compared to none.

THE ARCHITECTURE OF THE PROJECT:

The architectural vocabulary of the project is rooted in our desert vernacular and it pays homage to the pioneers of California Modernism by using materials in an honest fashion, maximizing the indoor outdoor relationships we all crave in our daily lives.

It will provide housing for us members of the community who work and love our downtown, it will attract much needed retail opportunities and it will become a focus of social and public interaction we all need in our daily lives, but for the time being we have to find them in out-of town communities.

This development is designed not for the speculative investor, but for people like you and me, who loves this city we call home and would like to have the opportunity to live near the places we work.

Finally, you will find that the architecture of the project uses many of the design strategies developed by our predecessors.

1. Stacking the mass (bulk) of the project in the back of the site is what William F. Cody did with the Spa Hotel in 1945, and leaving the low scale buildings in the perimeter of the site.

2. The slenderness and transparency of the project owes its origins to the works of Neutra and Wexler, master and disciple always struggling with the essence of space and materials.

3. The unapologetic masses displayed in the elevator cores and blank walls are rooted in the work of Llyod Wright and Stuart Williams

4. The heroic and bold moves of some of the elements in the project are inspired by John Lautner, John Potter-Clark and our beloved Albert Frey.

In conclusion, even though The Palm Canyon Mixed Use Project stands on its own merits, it also pays homage to the Modern Desert Vernacular by striving to achieve simplicity, purity essential use of materials and site specific solutions, without being nostalgic in its final product.

Commissioners, on behalf of all of us who want to see this city and its unique heritage to continue to evolve, thank you for your time.


Escalante Architects was just published in The Press Enterprise about their adaptive reuse project for St. Theresa School by converting the old William F. Cody convent into a new pre-school. Please visit http/www.pe.com/sharedcontent/VideoPlayer/Show.php?vidId+90264 for more information